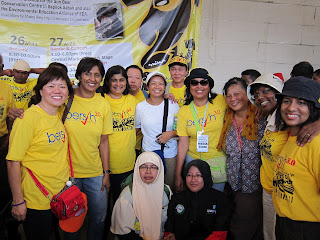 When the Arab Spring happened in January 2011, our leaders reacted in a very odd fashion. The first response was to bring all our students in Egypt, all 11000 of them, home as if Egypt had just turned into a warzone and our students were in grave danger. It was very clear however, from what the students themselves said when they got home, that there was no physical danger at all. The ‘danger’ was more in the heads of our leaders who were perhaps afraid that our young people might get some funny ideas about democracy. Perhaps they thought the word doesn’t exist in Arabic.

There were also a lot of protestations by our leaders that Malaysia is not Egypt and our PM is not Mubarak. Well yes, Malaysia is certainly more economically advanced than Egypt. It doesn’t have the high levels of poverty and great inequalities that that country has had for decades, as well as the high youth unemployment, all of which added to the recipe for unrest that was bound to come at some time.

So no, we are not Egypt. But you know what they say about how people doth protest too much. What is this obsession with us NOT being Egypt anyway? If we’re not, then why worry? Besides, who needs to worry about the Arab Spring unless they identify themselves with Ben Ali, Mubarak, Gadaffi and Assad?

And if our PM is not Mubarak – that ex-Air Chief Marshall of the Egyptian Air Force who ruled for nearly 30 years and is now on trial on allegations of corruption as well as the premeditated murder of peaceful protestors – then what is he?

Mubarak was much adored by the Americans, which was why they didn’t know what to do when the revolution started. After all they got Egypt to sign a peace treaty with Israel. During the Gaza siege two years ago, it was the Egyptians who obstructed aid from going to Gaza through Rafah. Nice guy, Mubarak.

But our government will not acknowledge that these demands are quite normal. Well maybe they’re not in an undemocratic country. But by refusing to support the Egyptian people’s right to all of these, do they support Mubarak and the Supreme Council of the Armed Forces (SCAF)? You know, the ones who attacked their own people in Tahrir Square and killed some. The ones who did virginity tests on women protestors. The ones who tried to shut down the internet during the revolution?

The ones who are trying to rig the elections?

If the Tahrir Square occupiers brought down someone like Mubarak, is that necessarily bad? They still wanted to have proper elections afterwards. And lo and behold, the Muslim Brotherhood won many seats. Well, that’s democracy, it doesn’t necessarily give you the best government. But that’s no reason to get rid of democracy.

If Malaysia is not Egypt and our leaders are not Mubarak, then why are Malaysians who went to Bersih treated like Egyptian protestors? As Tommy Thomas has pointed out here, Malaysians are not much into occupying anything. They did not bring out tents and blankets so that they can sleep in Dataran Merdeka til the government was brought down. If anyone had gone down to Dataran on the Sunday after Bersih 3.0, apart from the barbed wire, everything was back to normal. The cars were out in the streets. The malls were packed. The restaurants were full. Made our point, now let’s go eat.

This is why we are not Egypt. In this we agree with our government. We are NOT Egypt. But then why respond in such Mubarak-like fashion?

The National Fatwa Council has issued a fatwa to say that demonstrations against the government are haram. This is exactly what the head of the Al-Azhar University Fatwa Committee said in the days after January 25 2011 when the Egyptian revolution started. He seemed totally out of touch with his people and the events that were unfolding. Even the Muslim Brotherhood, or at least the younger members, were out there demonstrating, along with their more secular fellow citizens, Muslim and Christian, men and women, young and old. So getting the NFC ( hmmm…dubious initials…) to issue such a fatwa seems very Mubarak-like, doesn’t it?

Does this mean, by the way, that demonstrations against the governments of Penang, Kedah and Selangor are now haram too? Or only if they are against the Federal Government?

If I now want to have a demonstration against, say, Perkasa, I can, right? Since they’re not the government?
Posted by 1Christians Malaysia at 22:43